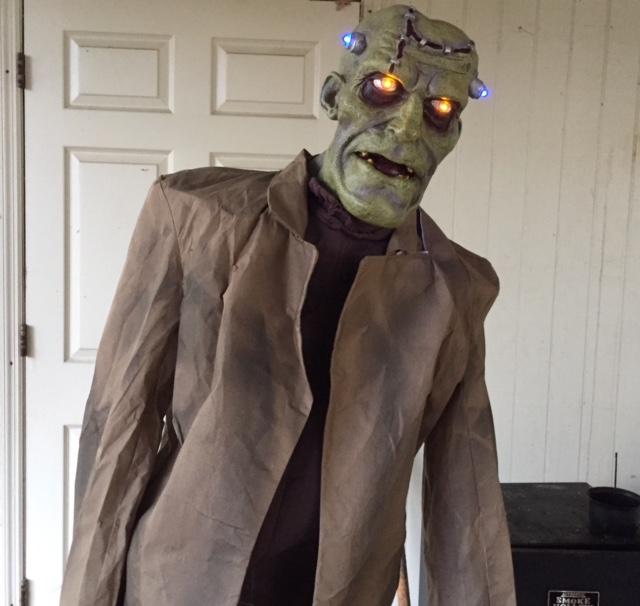 Last year I was walking through Home Depot after Halloween and noticed that the manager was marking down Halloween items to make room for the Christmas stuff he had in the back room. Everything was slashed to 75% off and when prices drop that drastically you can find some good value in things that are left over from the holiday.

One of the items I picked up was a 6′ Animated Lab Monster. This is basically a Frankenstein’s monster prop but I guess do to some legalities Home Accents weren’t allowed to put any reference to Frankenstein on the box. Anyway, this prop was still pretty cool for the reduced price. Originally Frankenstein was selling for $104.30. It was reduced to $74.50 the week before Halloween and after the holiday it was dropped to $18.60 after they took 75% off. I knew this was too good to pass up and brought Frankenstein home with me and put him in the garage until a few days ago when I brought him out and put him together for the first time be used for the massive Halloween party I throw every year in October.

Frank was pretty easy to put together. (I named him Frank. It’s short for Frankenstein’s monster.) It took about five minutes to take him out of the box and then assemble Frank. The only problems I had were with his hands and shoulder. I wound up getting some zip ties to keep his shoulder from coming out and his hands from coming off.

When he’s activated his eyes light up along with the metal things on his head that he uses to conduct electricity. I unplugged the eyes because I hate when a prop’s eyes light up. It just looks cheesy and I try to make the props look as realistic as I can. I don’t mind the side of his head lighting up because it kind of goes with the electricity sound Frank makes when he is activated. I think I am going to put some of those live wire props from Spirit Halloween behind him when I set him up for my Halloween party.

Here is Frank in action.

The prop is 34 inches wide and stands right at 6’2 feet tall. The Home Accent Lab Monster is pretty tall and leave an impression on you. The sensor that activates the prop is just below his chin. You will have to make sure his coat doesn’t block it. The way the coat was folded in the box must’ve been awkward because I noticed it kept sticking out a little and blocking the sensor.

Once he is activated Frank will moan and begin swaying side to side. You will also hear electricity buzzing as if he has just been brought to life.

I don’t think that Frank is one of the best props I own but for twenty bucks I’m pretty happy with what I have. I’m considering buying the old school Universal Silver Screen Edition Mask to put on the prop to make him look more like Frankenstein’s monster and less like a 6′ Lab Monster.

All in all, I’m pretty happy with the prop and can’t wait to show him in October.