Get AHead for Halloween with Little Jars of Horror 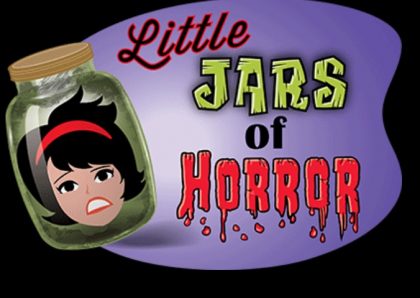 I stumbled across Little Jars of Horror a month ago when I was looking for new props to use at my Halloween party in October. They took a good idea and made it into an inexpensive prop anyone could afford if they wanted to add a little something to their haunted house for Halloween.

Little Jars of Horror can make a custom jar with your head in it or you can choose from their Stock Jars that feature dozens of creepy heads in a jar to choose from. (I think the Bereft Bacon is the creepiest one). The Custom Jars are reasonably priced at $37. The Stock Jars, which include everything from clowns to Donald Trump are only $29.95

Little Jars of Horror create the custom jars by lacing together four high resolution images that clients send in. They also do one or two horror conventions a year where they can take your picture and then have the jar back the next day.

The family behind Little Jars of Horror are in the process of opening a horror store called Ghoulish Mortals in the Chicago suburbs. The jars will be featured there where they can have their picture taken in the store.

Each jar is a lifesize 8×11 so that they are completely to scale with a real head. The jars are painted on the inside to look either Fresh Red or Fetid Green and also have a Frosted Ice jar that they will be offering this winter.

In addition to the custom jars, Little Jars of Horror offer monster jars such as the Bereft Bacon that features the work of FX make up artists and horror sculptors. Each artist receives a percentage per jar sold at the end of the year. Little Jar of Horrors has 8 new artists on board that will be posted in time for Halloween season. Their best sellers continue to be the political jars, Donald Trump, Hillary Clinton. Surprisingly enough people are still buying Hillary jars eight months after the election.

If you want to get AHead for Halloween this year you need to check out Little Jars of Horror.