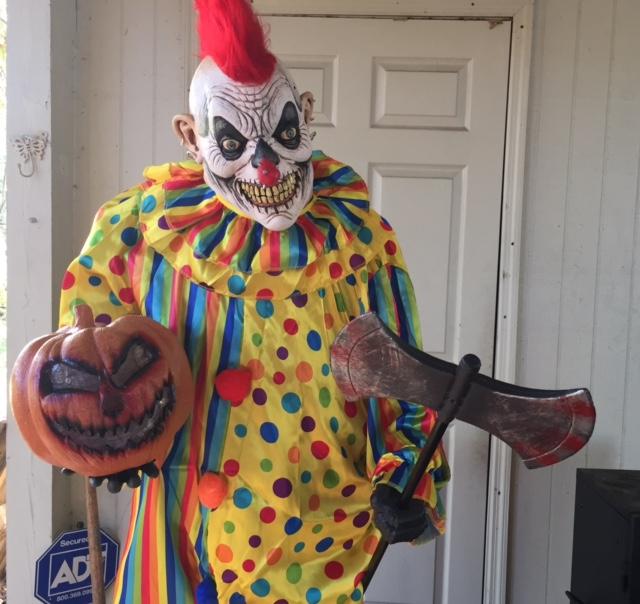 A few years ago I picked up a Headless Horseman Halloween prop from CVS the day after Halloween. It’s supposed to move and talk but something happened to it and it doesn’t work. I paid $15 for it after it was reduced when the store was in a hurry to liquidate their unsold Halloween items to make room for their Christmas stuff that starting to pile up in the back room.

I’ve stuck it out in the yard for Halloween a few times since it’s not that scary and the kids in the neighborhood aren’t alarmed by it.

Every year I make a clown tent and this year I am adding onto it and it’s going to be three times bigger than last year. I have several clown props and I started thinking about doing something with the Headless Horseman that it basically an afterthought each year. I really wanted to jazz him up and make him a big part of the clown tent this year.

I knew first of all, I’d have to get a head for my Headless Horseman if I wanted to do anything with him. So I went to Amazon and got a Styrofoam head.

Luckily the head fit right down inside where the cape drapes around his neck and fits really snug. I was afraid I would have to get some glue or something to hold it in place but with the way the cape is attached to the prop the bottom of the head slid right in and stayed in place.

Next, I had to get a clown costume. I found one for under $15 that looks great and didn’t break my budget.

I had to take the prop apart at the waist and legs in order to put the suit around him. The suit is one piece and fairly easy to slip over the existing costume. The suit ties in the back with four strings in two places. I tied it together pretty tight to hold it together. I don’t want people to see the Headless Horseman attire underneath the scary clown.

The next and most important part of the prop was finding a mask. In order to make the prop look real the mask had to look real too. Ghoulish Productions makes some really good masks and I found one on Amazon that really made the prop look like something that was real.

I like the red mohawk and all the piercings on the mask. With the axe and pumpkin in his hands this clown looks like he means business and I wouldn’t want to come across him in a dark alley.

There it is. My Headless Horseman is now a creepy clown prop. Even if you have a bad Halloween animated prop you can turn it into something a little scarier if you just use your imagination. A bad animatronic can be made into something a lot cooler and you won’t have to break the bank to do it if you dig around on Amazon.com and find a deal.