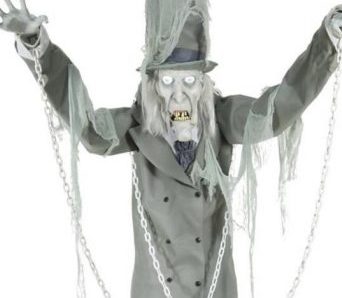 What’s old is new again. Spirit Halloween is bringing back their 7 ft Towering Chained Ghost for 2018. After debuting in 2016 the large animatronic ghost wasn’t part of Spirit’s collection for 2017. However, in January the Towering Ghost suddenly appeared on Spirit Halloween’s website and appears to back for 2018.

Here’s a video of the prop in action.

One really cool feature about the Towering Ghost is that it actually has more than one or two sayings. The animatronic has five phrases it will saw when trying to spook your friends and family in October.

“This is the nightmare that I call home, it comes furnished with chains that bind you here for eternity. It’s a devilish nonexistence I don’t wish on anybody, but it looks like you are here to stay!”

“Who dares to trespass? State your claims for dithering here child and be quick about it! I have much of the manor to haunt and you are in my way!”

“The torment of a tortured soul as I, it is a torment I wish to share with you. For misery does love company and I have been ever so lonely. Might I talk you into staying for eternity?”

“Don’t be a fear to what haunts these halls, for it is Halloween, a time when all things haunted and ghoulish revel in delight. Why I hear them singing right now.”

What mortal dares to trespass on this forsaken residence. I was once as foolish as you before I was doomed to this retched existence. It’s a punishment you deserve. Be done, before I decide I should have some company for eternity.

At $199.99 the Towering Ghost isn’t cheap but he does look pretty menacing. The prop stands seven feet tall and weighs approximately 15 pounds. Like most 7′ props the Ghost is a little more difficult to put together compared to other props that stand around 5 or 6 feet tall. The prop moves from side to side and has the same hands as the Towering Witch. His eyes light up and his mouth also moves as he talks.

I really like the animatronic Towering Ghost and think he would make a great addition to a cemetery scene in the backyard. With grave stones all around him the prop would really look cool with some fog coming up from the ground.You could even keep the Towering Ghost out for Christmas as he does have a resemblance to Jacob Marley from A Christmas Carol.