Ten Halloween Props We Want To See In 2020 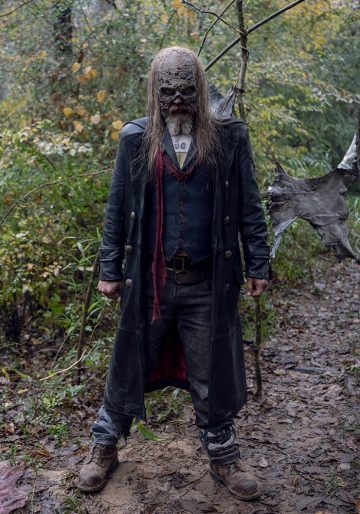 Halloween 2019 is in the books and I’m sure it was a record year for those who make props that you find at Halloween Express, Spirit Halloween and other retail stores. Now we can start thinking about Halloween 2020 and all the fun stuff that is around the corner.

Last year we put out a list of props we wanted to see in 2019. And someone must’ve been paying attention because we actually got one of them, Pennywise, who was #4 on our list.

With all the attention to animatronics recently, with the new Nicholas Cage movie coming out plus the hit video game Five Nights at Freddy’s, it got me thinking, why has no one done anything with Chuck E. Cheese? Chuck E. is the OG of animatronics and it only makes sense that someone would make a prop of the large mouse everyone grew up with. Chuck E. Cheese isn’t scary unless you are a little kid. If you are under five he can be terrifying! I don’t think this one gets done but I know I would have to have a long conversation with my wife explaining to her the pros and cons of why I have to spend $250 on a Chuck E. Cheese animatronic for my man cave.

I’m really surprised no one has done a Venom prop yet. He’s not part of Disney and there is supposedly a new movie in the works. If someone can make a deal I think a lot of money could be made with a Venom animatronic.

I got an email a few weeks ago from someone asking where they could find an animatronic Undertaker from the WWE. This got me thinking. Why has no one done this yet? The WWE has already licensed Undertaker’s image for masks that Trick or Treat Studios has been making. If someone had the money to buy the license from Vince McMahon, they could make a killing from not just old school wrestling fans, but also hardcore Halloween enthusiasts. The Undertaker has been digging holes and taking souls in the WWE for almost thirty years now. I think a Taker prop is easy money for whoever decides to pull the trigger and gets a deal done to produce it.

Speaking of the WWE, has anyone seen Bray Wyatt’s character ‘The Fiend’? He’s the current WWE Universal Champion and one of the coolest things I’ve seen in a while. He’s big, bad and scary. I know I would definitely be down for buying a Fiend prop for my man cave this March before Wrestlemania.

Last year The Bent Neck Lady was #6 on our list. We are bringing her back because she would make a great Halloween prop! The Haunting of Hill House was the sleeper hit of 2018 and ever since fans have been buzzing and clamoring for a second season. I’m not really sure how Netflix would pull off another season unless it was a prequel. But if someone bought the licensing rights and put out a Bent Neck Lady Halloween prop I imagine there would be a ton of demand from fans of the show.

With the Madalorian coming out on Disney Plus Disney would be wise to capitalize on their new franchise and create a Halloween prop of a really cool character. However, I’m not sure prop manufacturers will be able to afford to pay for the license since Star Wars always commands top dollar. Star Wars animatronics are basically non-existent but I have hope that one day someone will change that.

With the new Invisible Man movie coming out in 2020 someone could make a lot of money by making a prop. You too can make your own Invisible Man prop by pointing to a spot in your garage and tell everyone that the Invisible Man is right over there. It won’t even cost you anything. However, an authentic Invisible Man with the bandages would be really cool if someone wanted to make it.

With a new Scooby Doo movie coming out in 2020 it only makes sense that someone makes a prop of the ghost hunting dog. It seems like this one would be a no-brainer for Spirit Halloween. However, the rights fees might be pretty expensive and I’m sure Warner Brothers wants a lot of money. Nonetheless, I still think that eventually someone will pull the trigger and make a Scooby Doo prop in the very near future.

With the new Joker movie that came out last month it only makes sense to release an animated Joker for Halloween 2020 too, right? In 2017 Morbid Enterprises introduced a Joker animatronic that they took around to trade shows. However, according to Morbid there wasn’t a lot of demand for the prop so they decided to not release him. I thought the animated Joker looked great but I didn’t get a vote. We’ll have to wait and see if Morbid brings him back out for 2020. Keep your fingers crossed.

If you love Halloween there’s a really good chance you love The Walking Dead. The Walking Dead has been pretty lenient with their licenses and we’ve seen several masks over the years from zombie featured on the show. Right now Beta is the most intriguing character on the show and I think if someone produced a animatronic of the Whisperer they could basically print their own money in September and October due to the fans.

There you have it. What do you think? Is there an animatronic you’d like to see? Leave us a comment below with your ideas.