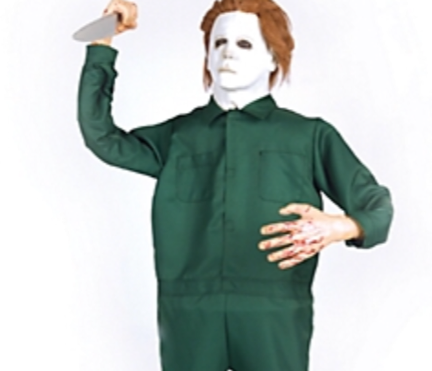 With Halloween coming back to the box office this fall its really no surprise to see Spirit Halloween bring back their animated Michael Myers to stores this year. What surprised me was to see that Party City was also rolling a Michael Myers isn’t as well. Yesterday Party City introduced a new Michael Myers prop on their website. Typically Party City isn’t known for animated props but they seem to be getting in the game this year after unveiling a Jason Voorhees animatronic last week.

Check out the new Michael Myers from Party City in the video below.

The Michael Myers prop stands at 6 feet tall and looks quite menacing. When activated Michael begins moving his arm up and down making a stabbing motion with the knife he is holding. He also makes breathing noises.

I like the fact that Party City is selling animated Halloween props. With Halloween Express and Spirit Halloween basically having a monopoly on the market aside from other places like At Home and Target that dont really have much to choose from. However, it looks like the prop is cheaply made. I get that the company has to make a profit and the markup on props is through the roof since a lot of them get sold at half price after Halloween. However, if you make a quality realistic prop people will buy it. My biggest pet peeve about Halloween props is when you can basically see its a shell of metal poles with a costume and a mask over it. You can definitely see that with Michael’s skinny little arms with from the Part City prop. One way to fix that is to wrap bubble wrap around the prop’s arms and legs to flesh it out and make them look more realistic.

I made my own Michael Myers prop for less than $100 by using a discounted butler animated prop from Home Depot and a Michael Myers mask and costume. Sometimes when you make your own props you can save a lot of money.